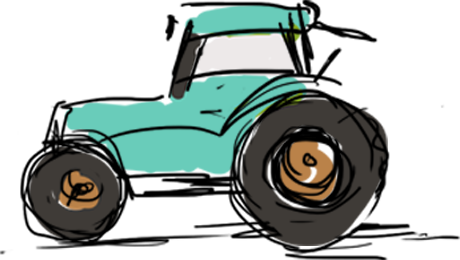 When I was young I used to travel with my dad Mario Chiaradia, founder of Zago SRL since 1978, sharing his work and his passion for beer.
On these trips I was lucky enough to visit numerous breweries throughout Europe, some of which I later returned to. But something had changed. Drinking their beers, in most cases, I no longer found the original and authentical taste:
the range of their beers no longer had the imprint of the historical recipe or perhaps the correct maturation times. Growing up, I understood the severe law of supply and demand, the dynamics of the now global market and the ever-tightening time needed to develop large productions.
Some producers have inevitably concentrated only on the growth of hectoliters produced to cope with large investments and the more the hectoliters grew the more they had to look for alternative solutions to save and speed up.
Here are the practices of using substitute cereals, forced carbonation and the wide use of microfiltration and pasteurization. Unfortunately, all this meant that this product lost some of its values, such as, for example, the sense of authenticity, seasonality, community and the sharing of work and the territory. Although fortunately there are still places all over Europe where beer has maintained that almost religious spirit – I refer to those experiences that many of us travelers have well impressed in our memory, such as after work in England. Employees, managers, entrepreneurs and workers, everywhere in Great Britain, meet up at the end of the day in front of a pint of good beer. And what about the relaxation that the Germans live in their garten at the feet of ancient breweries?
These are the memories that led me to go back to the origins, to the land, and to produce an Italian beer.

Friuli Venezia Giulia has always been a land of excellent wines but what perhaps not everyone knows that this region boasts a not inconsiderable beer culture. The reason is very simple: we have a territory and a climate that allow us to successfully grow barley and hops as well as the availability of waters with optimal chemical characteristics to produce beer.
It is for this reason that we have decided to grow barley, wheat and hops in our Chions (PN) fields. Here we also havepure water suitable for beer. 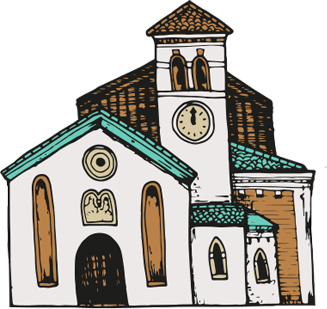 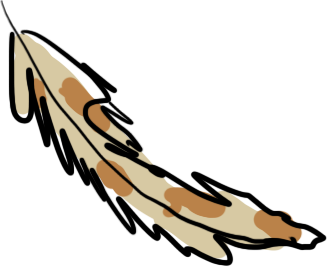 There is a big difference between “craft” and “agricultural” and it is this difference that is important to us, it is in fact what we do and what we offer to our customers. For clarity:

• “Craft”: refers to a production method and the possibility of purchasing all raw materials.
• “Agricultural”: contains much more information about the true nature of the product you are drinking.
This adjective indicates that the raw materials that make up that beer were cultivated by the same people who then transformed them, following them step by step then, from birth to the last transformation.

The production then follows a craft and non-industrial method.

That between wine and beer is not a competition but unfortunately it is often perceived as such.
These are completely different products: taste, production methods, raw materials, consumption opportunities, cultural background.

As for wine, beer also has its terroir. With this term, borrowed from the world of wine, we are not simply referring to the territory of production of raw materials but, in a broader sense, to all those characteristics – climate, land morphology and its chemical characteristics but also to the brewing culture of place, both by producers and consumers – who define an agricultural beer.

Wine is strongly linked to seasonality: the must is produced between the end of summer and the beginning of autumn and stored in temperature-controlled tanks. The wine of a specific vintage therefore has homogeneous qualities.

For beer things are different: it is true that every year barley, wheat and hops have peculiar characteristics but, once the raw materials have been collected, they can be processed at different times of the year unlike the wine which generally it is pressed during the harvest in September. This can naturally have repercussions on the finished product and here the knowledge of the master brewer plays a fundamental role. 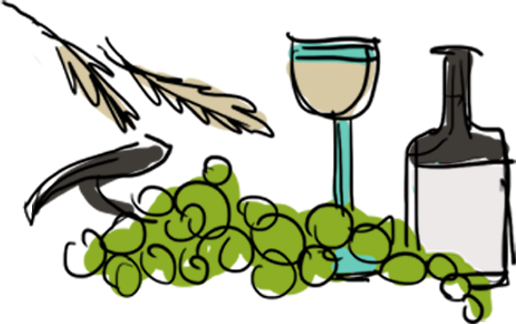 Water is the reference ingredient of beer, representing about 90% of its composition. Having excellent barley but poor quality water will not save the final product. We have chosen to establish our microbrewery in Villotta di Chions, a small village in western Friuli almost on the border with Veneto, due to the characteristics of the water.

Barley is to beer like grapes are to wine. It represents the body and defines the structure and the aromas that characterize the final product.
However, this ingredient is not used as it appears immediately after being harvested. In fact, it undergoes a malting process that transforms it into malt. The phase of the malting process can have different times and methods of executions and this gives the final product specific characteristics, making it suitable to the production of a particular style of beer.
There are various quality of barley malt: the two main categories are common malt (Pilsen Malt and Pale Malt) and special malt.

Hops are responsible for the bitterness of beer and help with malt to define its aroma. In ancient times it was not used but today it is one of the essential ingredients. If there are various qualities of barley, there are hundreds of different types of hops, for taste, aroma and bittering capacity. The master brewers choose and dose the different hops to get the desired beer style. Hops can therefore be divided into three large groups according to use:

Friuli Venezia Giulia is a region suitable for the cultivation of this plant and in fact throughout the territory up to Slovenia there are several hops gardens.

Water, malt and hops are necessary to make beer but without yeast these three ingredients would give life only to must. It is the chemical reaction triggered by the yeast that produces the “miracle”. It is a rather complex process but, simplifying it, yeasts metabolize barley sugars – made simple and therefore digestible due to the malting process – and transform them into ethanol, carbon dioxide and other chemical compounds. Yeast is composed of single-cell fungi. There is not a single type of yeast but different and these are used depending on the style of beer you want to produce.

There are two main families:

Zago Birrificio is an Italian agricultural company that cultivates its raw materials in Friuli Venezia Giulia to produce a high-quality beer. The agricultural brewery in fact stands out from the artisan one as we follow the entire production chain: from the cultivation of barley and hops in our fields in Taiedo (PN) to the actual production that takes place in our factory in Villotta di Chions.  In this area water, a fundamental ingredient of beer, is particularly pure and has values ​​that make it ideal for beer production.
The idea of ​​creating our agricultural beers was born more than six years ago, when we started growing two-row barley and five hop varieties in our fields. The aim was to create a dimension that would allow us to malt our raw material. Today our line consists of twelve references, all to-fermented beers, whose maximum alcohol content does note exceed however 8 degrees. 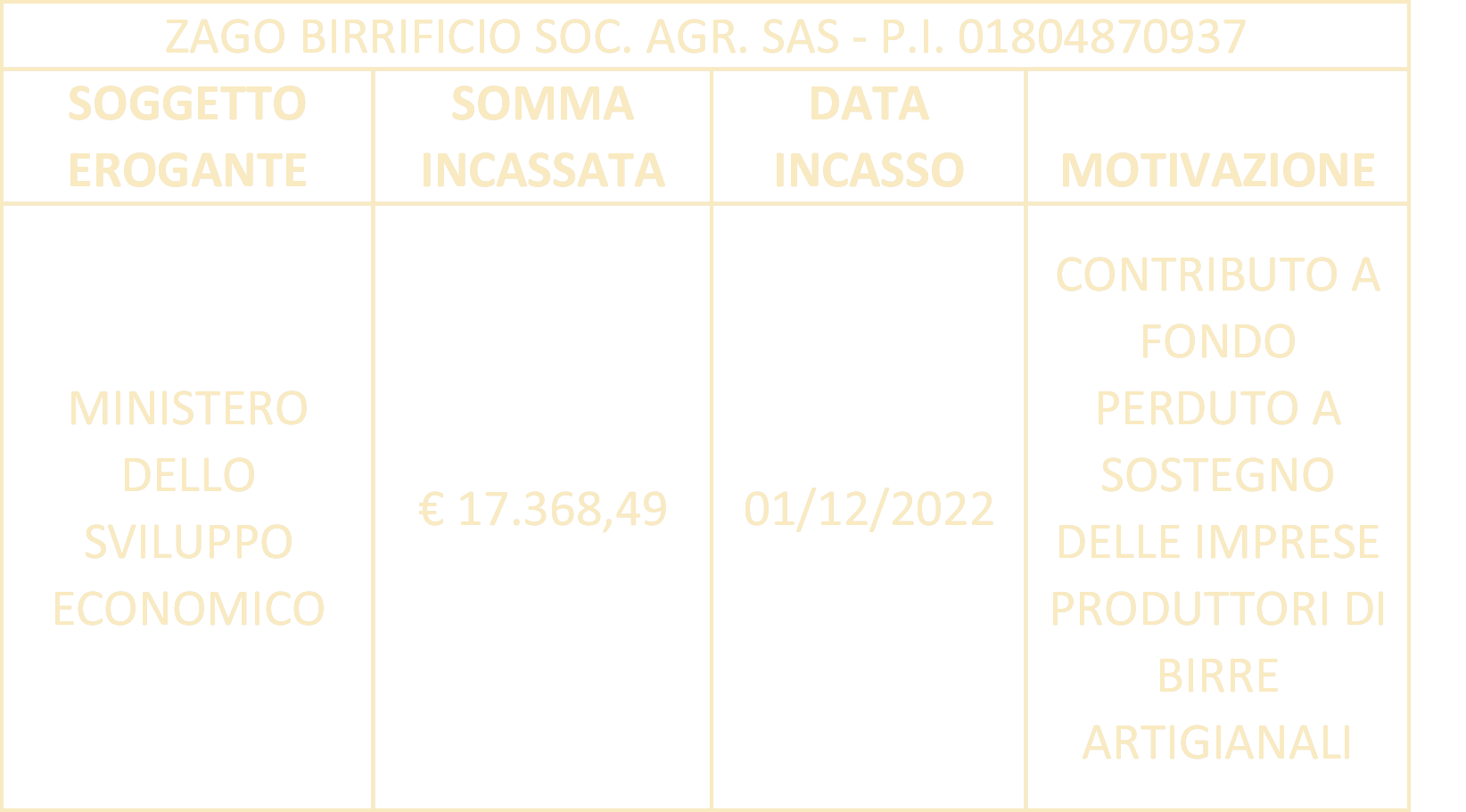